It's official! Snork Week has begun! So make yourself comfy and get ready for more snork goodness than you can shake an elongated head appendage at! 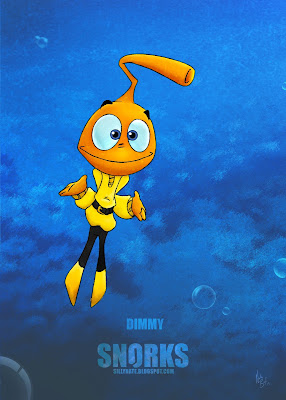 First up is Dimmy Finster. According to the Snork Wiki (That's right... there's a Snork Wiki), "not much is known about Dimmy's past." Pretty intriguing, huh? Even more mysterious is why Dimmy unexplainably disappeared after the show's second season. PLUS, he has a crooked snorkel. What's that all about?

I, personally, like to think that Dimmy was involved in some sort of "21 Jump Street" situation... posing undercover to get to the bottom of some mass-snork conspiracy. Once he was successful with his mission, the Snorkland government had him relocated and wiped the memories of everyone he came into contact with.

None of this explains the crooked snorkel, but hey, a good backstory requires a little bit of mystery! Amiright?

Your illustrations are really cool. You're very talented. Thanks for sharing.

Thank YOU for commenting!

Love the blog and the art. What do you use digitally to colorize and finish pieces?

Thanks! I use Adobe Photoshop.

I found you through a random google search. You're very talented. I posted a sourced and linked back image to your blog on mine. If this is a problem, please let me know and I'll remove it. thanks!

Or he got ran out of Snorkland for putting every 'all-you-can-eat'place out of business. ;)

ELSEWHERE ON THE WEB

Nathan H. Boyd
I'm a video editor that likes to draw and talk about nerd stuff on the side. This blog represents that "side."